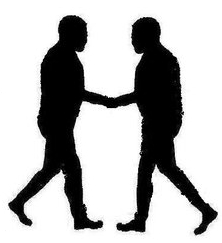 I started this blog as a venue for the discussion of relationships. All kinds of relationships, except that I will be avoiding any topic that might be considered pornography. This will be a family-oriented site, even in the discussion of sexual relationships. Some of the material I plan to post here is taken from some unusual sources, such as the Texas Concealed Handgun License class (which I currently teach). Some of the material is based on my own experience, and some from various books on the subject which I have read. I plan to post initially once per week, but I hope that I will eventually have some guest authors who will help out and increase the posting frequency. If you would like to contribute to this blog, please read the guest author guidelines for how to get started.

I will start out with a series called LEAPS. I will be writing about LEAPS for the next five weeks.

LEAPS is primarily a method of (nonviolent) conflict resolution, although it has some other uses. It is an acronym:

Goal-oriented behavior is behavior that is directed towards a specific, usually inflexibe goal. An extreme example of goal-oriented behavior would be a person who is trying to rob you, in hopes of getting money for whatever other need is important to that person (such as getting the next drug ‘fix’ or paying off a bookie who is threatening violence if not paid promptly).

Influence by alcohol or drugs complicates the communication process, because you are then dealing with a person who does not have an intact, fully-functional brain. In particular, one of the first effects of alcohol is to impair the function of the prefrontal cortex, the part of the brain which deals with the consequences of one’s actions. In other words, it tends to make a person asocial.

So, when is LEAPS most useful? Generally, LEAPS is useful for dealing with a ‘normal’ conflict. In this context, ‘normal’ conflict is usually a result of conflicting goals, expectations, or desires between two or more people. Examples would be a manager dealing with an employee who is habitually late, or a teacher trying to motivate a student who is distracted. Even in close relationships, there will always be conflicting goals, and LEAPS is a tool that you can use to improve the relationships you have with the people you care about.

Over the next five weeks, I will go into each of the five steps of LEAPS in greater detail.