Why We Fall Out of Love

Posted on August 23, 2012 by Guest Author
Please share with your friends... 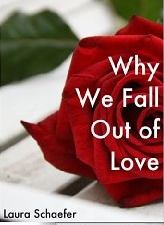 I have often joked that my favorite gig (I’m a violinist) is a wedding, because I enjoy the pervasive atmosphere of unrealistic optimism at weddings. It almost always gets a chuckle. Most folks realize that “until death us do part” has less than a 50% chance of really happening that way and that most couples eventually fall out of love. Sometime the laughter has a nervous quality to it, which is one reason why I don’t ever use that joke when I’m actually at a wedding. The other, of course, is that when I’m at a wedding gig, I’m busy earning my gig fee. I’m paid to produce beautiful music, not to be funny.

At any rate, the title of this ebook, “Why We Fall Out of Love,” (no longer available) by Laura Schaefer, really appealed to me. I checked out the reviews and they were “guardedly positive” in that the reviewers all say it’s a really good read, but only one of them thought it was worth 5 stars.

Since it was “sort-of” well-reviewed, and not very expensive, I went ahead and got it. After only a few pages, I started to wonder why nobody gave this one 5 stars. It is superbly written, and well-researched, with very few editorial errors. There is no BS, and I could definitely resonate with a lot of the things that Ms. Schaefer wrote. This short (it’s about a 15 or 20-minute read) ebook is a definite cut above most of the tripe that is typically found in the relationships niche. On the downside, some of the formatting was a bit strange, but I think that is probably just a Kindle artifact, because I see that sort of formatting problem in nearly every Kindle book.

The book consists of an introduction and nine short chapters, the first eight of which are entitled “Love Killer Number [1 through 8]” and the last is “Expert Advice for Staying in Love.” Looking back at my own history (one failed 16-year marriage, one very successful 20-year marriage), I felt a lot of resonance with the ideas in every chapter.

In particular, one of the love-killers that I found most interesting was the idea of just giving up trying, because you  tend to become familiar and at ease with your spouse and it is easier to slack off the original effort of wooing. You get in a rut. You forget to be actively romantic.  As the author says, “falling and staying in love is an active process that requires one’s direct attention, commitment and sacrifice.”  I’m not all that big on sacrifice, but then I never found that staying in love felt sacrificial.  However, the attention and commitment is a real winner. As in playing the violin, the more you practice, the better you get at it. So don’t stop!