Why You Should Avoid the Dating Advice Industry.

Posted on January 28, 2013 by SeekTruth
Please share with your friends... 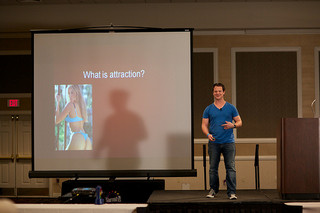 I’m primarily going to talk about the pick-up artist subculture that I got involved with, and namely a company called Real Social Dynamics, because that is what I have experience with. I started my “journey” into the pick-up scene, otherwise called “the community” back in 2008. At the time I had just finished high school without having dated a single girl. I had a few drunk make outs here and there at parties, and even had some girls that were interested in pursuing something further with me, but I just didn’t go for it because of insecurity and self-esteem issues. I usually had to be drunk to feel at ease with a girl.

One day I typed in “how to get girls” in a Google search to see if I could find something to help me get over my inhibitions. I stumbled upon a website called mASF. There I found a plethora of information on tactics and techniques, as well as “inner game.” Being very analytical and feeling like I had found something that no one else really knew about, I began to read the forum religiously for a couple hours every day. It seemed like there were so many new concepts to learn, and secret ways to build confidence and have sex with tons of girls.

You just had to spend a few years improving your inner and outer game, as well as reading books on evolutionary theory, mating, social influence, seduction, listening to audio CD’s and watching DVDs by gurus who apparently knew what they were talking about. What made them qualified was their own experience, and since they had spent so much time figuring all this out themselves, you wouldn’t have to go through the work like they did. They will basically tell you what they learned, in exchange for either your time or money, sometimes both. They had no credentials or qualifications otherwise, because none are available to become a “seduction guru.” It’s a scam industry.

Once I skimmed through all the different schools of thought, I decided to follow Real Social Dynamics. This would unknowing lead me down a dark path in the next couple of years. What appealed to me about this company was primarily that Tyler Durden (also known as Owen Cook), had so many theories about everything, and it all seemed so interesting to me at the time. Little did I realize hardly any of it was essential to getting better with girls, and was being used to sucker guys in and make them dependent on Tyler and his crew. It was information primarily designed for guys who already over analyzed everything. You got into minute details about eye contact, body language, attention radius, state, ego, self-esteem, uestsocial conditioning, reality, consciousness, etc. ad nauseum.

I spent a couple of years trying to “get this part of my life handled”, in community parlance. What ended up happening was that I became even more self-conscious and more anxious than I had ever been in my life. I watched a program called “the Blueprint” that was basically Tyler talking for 20 DVDs, each one about an hour long. It was supposed to be the best program out there according to “reviews” I found online, as well as on other community forums. He spoke about the things mentioned above, as well as many others. What was stressed constantly in that program was the need for “Deep Identity Level Change.” I didn’t realize it at the time obviously, but there was sinister intent in that statement. This article explains what the Blueprint was basically about better than I can, so I will post it here:

Not all dating advice is this odious, but a lot of the dating/pick-up companies have a lot in common and use similar techniques such as to fear mongering to your insecurities, drawing you in and trying to sell you their solution. It’s all about money, and it’s all about putting you in a constant loop of education so you start to rely on them, and keep coming back for more. They can string you along by creating new issues that you have no idea how to solve, things you didn’t even know were supposedly wrong with you, and then they will “help” you solve the problems that they created. They create the demand by damaging your psyche, and then supply the solution. This is cynicism taken to an extreme.

The whole problem with the dating industry is that supposedly someone of some undefined authority is going to impart superior information onto you. “Secrets” that nobody else really knows. Let me tell you now there are no secrets! You need to take responsibility for your own thoughts and awareness. This is why it’s essential to become a critical thinker, become aware of your biases and try to look at things a bit more rationally and objectively. Dating should be simple. If you have deeper rooted psychological issues, then see a therapist and work those out before you get into a relationship. It’s better to be single than to be in a destructive relationship.

Once I became aware of the harmful nature of Real Social Dynamics and most dating advice, I started to educate myself. I found resources online and saw that I wasn’t the only one who experienced the negative effects of watching the Blueprint and following other types of dating advice. It was my primary responsibility for having let these influences into my life, and they helped me realize that I had work to do on myself. I started seeing a therapist and now I’m on the way to becoming healthier and happier.

You don’t need anyone to tell you what do to when it comes to dating, and you don’t need to change who you are. There are so many girls and boys out there who will like you just for you. Don’t let scam artists make you feel bad about yourself and believe otherwise! There is no universal formula for being attractive, although there are traits that are universally attractive, such as: self-acceptance, being able to express yourself, honesty, assertiveness and creativity. Work on your social skills in a common sense way and put yourself out there more. Get some hobbies, and meet friends and potential lovers through those avenues. If you want to have more opportunities to find a date, become more involved in life and meet more people. Make connections and build a good reputation for yourself. The rest will follow naturally.

I am a contributor to the website PuaHate.com, under the username SeekTruth. The website focuses on exposing the scams in the dating advice industry.
View all posts by SeekTruth →
This entry was posted in Dating, Social Relationships and tagged dating-guest. Bookmark the permalink.